Go over the Golden Gate Bridge

I’m pretty sure my father said that, or it could have been the theme song lyrics to Full House. Either way, the advice is timeless. While planning a trip to California for Kit’s mother’s birthday, the opening montage for Full House became my trip itinerary for San Francisco. And, the Golden Gate bridge was definitely on top of my list of things I wanted to see and do. I mean how could you not want to drive over the Golden Gate while your there, the Tanner family looked so cool driving across it, even in their early 90’s wardrobe.

This item was actually tons of fun to complete. We tried planning a route from Oakland airport over the bridge and then onto our hotel but then we looked at a map, and realized that it would be much easier and more fun to book a tour that included going over the bridge on it.

The tour operators are an older married couple who have converted a 1955 Mack fire engine into their tour bus. They also live in the old San Francisco firehouse. As a firefighter I have to admit, it never gets old riding around in an open cab fire truck. 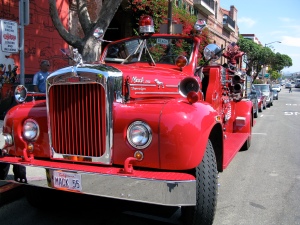 It was absolutely freezing the weekend we were there and riding across the bridge bundled up in turn out jackets and winter hats wasn’t the most enchanting experience ever, especially since the image in my head had me sitting next to DJ. She seems fun, like she would be up for a good time, you know?

I have to admit the only real disappointing aspect of having this on my life’s to-do was the fact that there are tolls on the bridge. Complete with an E-Z pass lane and everything. Not that having to pay a toll to cross was disappointing, it was the reality that everyday people use the bridge as a necessary evil to get to work. It’s probably a huge pain in the ass part of a commute in the morning. I had such a romantic image of the Golden Gate Bridge, and now seeing it used as a means to get to work made it less romantic. I mean I would still soooo try and mack it with DJ if she where there, but I guess one man’s dream destination is another’s pain in the ass commute. 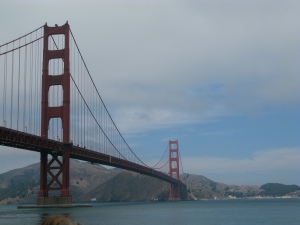